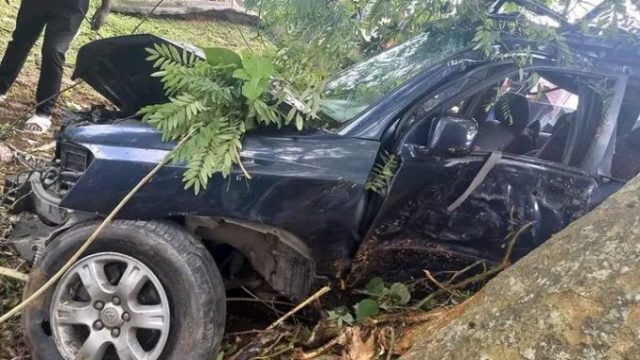 In sobs, the husband begged his dying wife’s forgiveness.

The actual account of how Mrs. Clara Bassey, a female lawyer in Calabar, the capital of the state of Cross River, died in a car accident last Sunday while pursuing her husband, Mr. Sonnie Bassey, who was accompanied by his claimed girlfriend, has come to light.

According to reports, Barrister Sonnie Bassey was born in Imo State, while his wife was from Akwa Ibom State.

There are various accounts of what happened, and the discovery of the mystery figure who revealed the deceased wife’s husband’s whereabouts is at the heart of the narrative.

The late wife had long suspected the husband, but she was unaware of the girlfriend’s true identity, according to a family source who asked to remain anonymous. He disclosed to Saturday Vanguard that the husband and the girlfriend’s connection had been going on for quite some time.

“Sonnie and I attended St Patrick’s College,” a close friend of the husband who did not want his name published, told Saturday Vanguard. He was raised in Calabar.

Before becoming a lawyer, he worked as a car dealer. We engage in chess play. Before relocating to his current residence, he resided at Barracks Road, close to Bogobiri.

He and his wife had been fighting over the girl, and when she learned that her husband, who had claimed to be traveling out of town, was actually in town, she became extremely enraged, which is what sparked the hot pursuit.

It was discovered that the aforementioned girlfriend, a single mother from the state’s Yakur Local Government Area, was not only the husband’s long-term partner but also a smart lawyer who helped him draft his legal pleadings.

According to reports, the husband left town last Sunday, but when he returned, he opted to first meet his girlfriend before heading home, and that’s when a bystander spotted them together at the Spar Supermarket and called the wife to let her know.

READ ALSO:  In front of a terrified crowd, a zookeeper was attacked by a 16-foot crocodile

In a Toyota Highlander, the late wife apparently waited for them at the stadium, which is adjacent to the supermarket, and pursued them when she saw her late husband and his girlfriend going by in a Mercedes Benz.

About a kilometer from the point of takeoff, at the New Secretariat, the husband veered off the highway at top speed and headed toward Atekong Drive.

The wife, trying to keep up with the husband by taking the same route, lost control and rammed into one of the ornamental trees by the roadside, completely wrecking the car and sustaining fatal injuries in the process.

The husband observed what had happened in his rearview mirror, pulled over, requested his girlfriend to get out of the car, and then went back to try to save his wife.

She was saved by other motorists, who assisted in transporting her for medical care to the Nigerian Navy Reference Hospital, which is about a kilometer away and still on the same roadway.

According to a family member at the hospital, Mr. Sonnie begged his dying wife for forgiveness as she lay motionless next to him and begged her to come back to life so she could care for their three children before she passed away.

The source claims that “it was at the hospital that the man sobbed sorely, pleading with the wife to forgive him, professing all his love for her, and pleading with her to wake up.

The person who informed the deceased widow that her husband was with his lover over the phone was actually present at the hospital when she passed away. The woman who had been with them the entire time at the hospital was the one interacting with the deceased, but the family members weren’t aware of this at the time until they looked through the deceased’s phone.

“Having said that, I can assure you that the husband cherished his wife, never made light of his family, cared deeply for them, and carried out all that a husband and father ought to do. Most of the tales and several variations you have been reading are untrue.

He was rumored to be in a coma just a few days prior, and some even claimed that he was dead, but all of these claims were untrue.

“It is normal for someone in his circumstances to feel sober and isolated from others after losing a loved one, but I can also assure you that while he may be experiencing all of those things right now, he is most definitely not in any danger.

The woman who gave the dead woman’s location as a tip is the true killer, not the single mother who served as his “side chick” and has since erased her social media profiles.

She was actually present at the hospital when the victim was declared dead. I wanted to beat her when I understood that she was to blame for the victim’s early demise, but it was already too late by the time we came to that realization.

“The husband may be in a sober frame of mind, but I’m not aware of any major health issues related to the incident. Although he is a wonderful father, spouse, and hard worker, the source claimed that he was simply a victim of circumstance.

Another family member, who also requested anonymity, told Saturday Vanguard that the husband was a true gentleman and that what happened was just sad.

“He was indeed hospitalized, but we hope he recovers quickly. He had a stroke a while ago, and he is only now healing, not to mention what just happened, making him only human. They should stop spreading death rumors, and they should keep his kids in mind as well.

READ ALSO:  In its appeal, ASUU claims that the FG has declared war

It’s quite unfortunate that this kind of thing occurred to him because both of them were inseparable lovebirds; he was constantly with her all the time. His relationship with his late wife began as long back as 2004 or thereabouts, and it culminated in marriage with three children.

“A family friend is currently caring for the children; all we can do is pray for him to be strong.

The deed has already been done, so people should give the family space to grieve in silence.

Anyone could have experienced the same event that occurred to him.

Because he opposes divorce and separation and is simply a gentleman, the insider said, “There are divorce cases when he even returned money to female clients while preaching peace. People should consider his children and stop condemning him.”

Mrs. Ann, a friend of the late Clara, told Vanguard that the guy should be held accountable for his wife’s death as a result of his actions. The dad claimed he had to leave town for business, but in reality, he was going there to keep a date with a “side lady,” so he didn’t send his kids back to school that day.

Which woman hearing that wouldn’t be furious?

In her response, another woman, Oge Okafor, condemned the deceased for her behaviour, which she called “thoughtless.”

Was it the right course of action for her to chase after her husband and his girlfriend? she questioned. No now. Would the man have refrained from leaving if she had caught up with them, argued with them, or both? A rat can be killed in a variety of methods, abeg, omo.

The couple’s home was under lock and key when we came, but the family of the deceased could not be found.