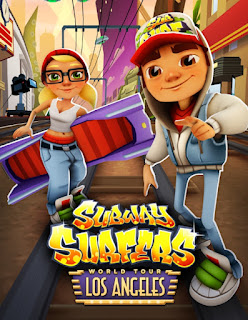 Games come and go, but we know that some games are more entertaining than others. Subway Surfers undoubtedly falls into the category of mobile games with very entertaining and engaging features. Certain times you may begin playing Subway Surfers with the intention of stopping after five rounds, only to continue playing even after two straight hours of nonstop gaming. Subway Surfers is one of the most captivating games of the last few years. The game is developed by kiloo (a private company based in Denmark) and SKYBO Games.

In this article is a link with which you can download Subway Surfers. To clear your doubts, it’s important to let you know that the game is available on Android, Kindle, iOS, including Windows and PC.

If you’ve not played the game before, this is how it works. You are made to play the role of a street gangster who is at the beginning of the game seen applying graffiti to a railway site. Once you are caught by a policeman while applying the graffiti, you begin running through the railway road to escape the coming policeman and his wild dog. While making smart moves and running on the railway road, gold coins are made available for you to pick. You have to avoid speedy coming trains and other obstacles on your way as you run.

You can win awards in the game by collecting special objects and participating in the Weekly Hunts. You can also buy hoverboards, mystery boxes, score boosts, mega headstarts and others with the coins you earn in the game. You are also provided with the choice of increasing the duration of special tools like your jetpack powerup, coin magnet, super sneakers (for high jumps) e.t.c.

Subway Surfers was first released on the 24th of May, 2012. Since then, it has enjoyed a lot of updates with commendable improvements to make it enjoyable for players. While playing the game, your speed consistently continues to increase, and you are expected to be smart enough to control it while dodging coming trains and positioned obstacles.

What You Could Experience While Playing Subway Surfers

• You can also challenge and assist your friends!

• This App is a universal App with HD optimised graphics.

• You can grind trains with your cool crew!

You will enjoy the colourful and vivid HD graphics!

A Superfly with the paint powered jetpack!

• And you can join us for and enjoy the most daring chase!

What are the New Features in Subway Surfers Mode

• Get to unlock Bjarki Fisher’s Outfit and use it to surf the splashing Big Blue board.

• The Subway Surfers World Tour has been taken to a beautiful Iceland.

• You can now surf through chilling ice caves and scorching volcanoes.

• You can also boost your Surfer crew with Bjarki, the strong and amazing explorer

• When did subway surfers come out?

• How to hack subway surfers?

Answer: There is no known possible way to hack the new version of subway surfers.

How to get free coins on Subway Surfers?

You Must Be A Winner In Six Months! – Benitez warns Graham Potter, manager of Chelsea