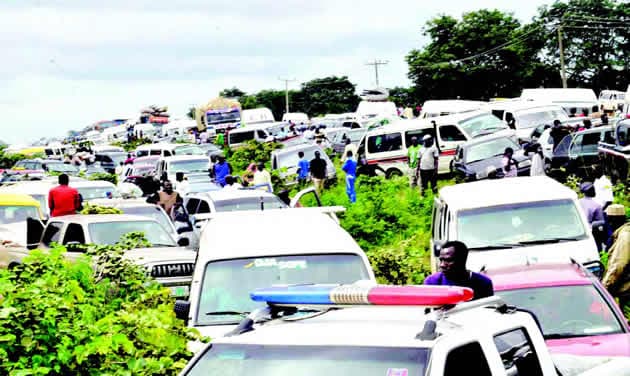 On Thursday, motorists were stranded along the Kaduna-Abuja route due to traffic congestion brought on by a truck accident.

According to information obtained by Daily Trust, the majority of the stuck commuters had to find alternate routes via surrounding bushes and villages to evade the traffic.

According to reports, Wednesday night saw the beginning of the bottleneck, when some drivers decided to spend the night on the road.

According to information obtained by our correspondent, a vehicle carrying metal scraps crashed on Wednesday, obstructing the route between Kateri and Maraban Bisheri not far from a military post.

Makeri Danjuma Mohammed, a prominent member of the community in Kateri village, verified that some drivers did indeed spend the night on the road because of the congestion.

The community leader added that local residents from neighbouring villages helped clear grasses and smaller trees to provide a temporary road for drivers to use.

“The traffic jam was caused by an accident. I was told that a scrap metal-carrying articulated lorry had crashed in the middle of the road.

The route is terrible, and large vehicles like trucks and cars frequently crash while attempting to avoid potholes and muddy areas.

As a result, Kateri and Maraban Bisheri were involved in an accident.

“Villagers are currently chopping down bushy grasses to make a passage for cars to travel through as we speak today (Thursday).

Other drivers avoided the jam by driving through villages, he claimed.

The acting Sector Commander of the Federal Road Service Corps (FRSC), Kaduna Garba Lawal, responded when reached that he was in a meeting but promised to call back; however, as of the time this report was being filled up, he had not yet done so.