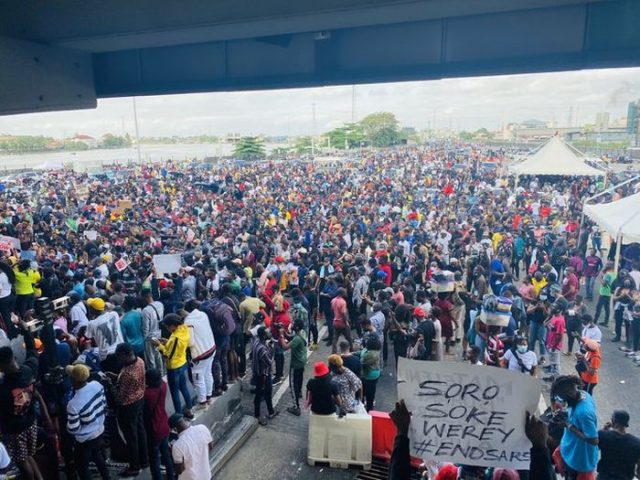 Yahaya Bello, the governor of Kogi State, stated on Monday night that if the protesters had directed their rage into politics, the infamous EndSARS episode in which seven young Nigerians were shot at the Lekki Toll Gate in Lagos could have been avoided.

The statement was made by Bello, who on Sunday was named National Youth Coordinator of the Tinubu-Shettima Presidential Campaign Council, during an appearance on the well-liked Channels TV program Politics Today.

The event will be remembered less than a month from now, on the anniversary of a horrific shooting that will live on in Nigerians’ memories forever.

Between October 7 and October 20, protests against #ENDSARS were held in Lagos and other states across the nation.

Families, friends, and colleagues of missing people claimed security personnel had killed or imprisoned their loved ones during the protests.

The shooting at the Lekki toll gate on Tuesday, October 20, when nonviolent #ENDSARS demonstrators were fired upon by security personnel, which resulted in a number of deaths, is of particular concern.

The national youth coordinator of the APC Presidential Campaign Council responded to inquiries about how he intends to appease and persuade the Nigerian youths to move past the incident and vote for his leader by saying it was not an insurmountable assignment.

The first way the EndSARS demonstrators were supposed to express their rage, according to him, was through political participation and selecting their own leaders.

“Voting, elections, and the electoral process are entirely different from street protests and agitations.

- Advertisement -
READ ALSO:  A true account of a female lawyer who perished while pursuing her husband after news of a "side chick" surfaced

“Recall that I was the first elected governor to publicly identify with and support the EndSARS protest. They paid attention to me after I spoke to them three times, especially those who were in Kogi State.

I had the chance to meet with several of the EndSARS leadership after the protest and explain exactly where they went wrong.

“Now, I’ll also sensitize them and let them know if they don’t follow the right path. The best course of action is to support Senator Bola Tinubu, who will show off his talent for resolving the issues we face.

The Kogi governor said that his goal was to inform some of the nation’s youngsters who are still upset and leaving the country for foreign destinations over how the EndSARS issue was handled.

Bello said he would apply the knowledge he gained from dealing with a chaotic environment as a young governor to his interactions with Nigerian youths.

“I’ll only tell them the truth, like I’m known to do. The strikes, agitations, and threat currently occurring in our higher institutions and several other areas are, to start, wholly uncalled for.

“We will also sensitize them (youths) so that they can distinguish between political issues using this specific threat, those holding them back at home, why they are doing it, and the necessity of taking control of our own destiny.

“Due to my work in Kogi State, our leader Asiwaju Tinubu has recognized me as a deserving guy.

When I started working there, the state’s tertiary institutions and schools, including secondary teachers, were on strike. Since taking office, Kogi has not experienced another strike for a total of six years.

“As a result, we will inform them of the necessity to hold accountable those who have kept them in check. It is not the APC, Buhari, or Bola Tinubu, our presidential candidate.

Every time a political party attempts to use ASUU or another institution as a vehicle for a campaign, he added, “We are also going to teach them how to read between the lines.”