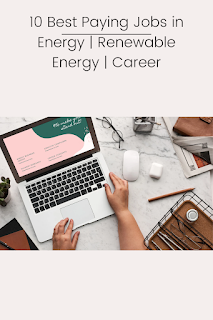 If we are keen on being honest to ourselves, nobody would like to work in places where they received peanuts at the end of the day. Hence, in whatever industry we want to work in, we seat back and analyze the best paying jobs/roles in that industry. This is to help us generate enough resources to take care of ourselves and our family. In this article, we’ve provided a comprehensive list of the best paying jobs in energy and this is to help make your career decision easy.

Now, let’s look at the ten highest paying jobs in energy considering how much potential employees can earn.

Solar engineers make around $35,000 – $44,800 yearly. Their jobs include building and designing solar panels, installing and maintaining solar panels and other solar electricity devices that help convert sunlight to electricity for domestic uses in homes.

The salary of an electrical engineer is usually between $54,000 – $140,000. They are an indispensable part of the energy industry. We cannot overemphasise the essential uses of electricity in our daily activities. Even in industries, electricity is needed to power heavy machines used for production processes. In fact, without electricity, life will be unbearable for humans in the 21st century.

So, electrical engineers are still very much needed in the energy sector.

The work civil engineers can do is not limited to building and constructing roads, or gigantic ultra-modern buildings. Civil engineers are also an essential part of the energy industry. They make good contributions in building and supervising the construction of huge renewable energy projects like dams. They also build and maintain turbines and big power plants.

The average salary of civil engineers working in the energy industry is usually between $60,000 – $106,000 every year.

Employees working as environmental Technicians as well paid in the renewable energy industry. They play the role of coming up with modern methods that help control and decrease pollution in our environment. After all, some of these sewages and biodegradable substances can be recycled, made less harmful, and used for other things. Thanks to the competent environmental technicians amongst us.

In the oil and gas industry, the services of a chemist are always needed. Even though the oil and gas sector is a renewable energy source, we still need their products to power out automobiles that use fuel oil and lubricants. Even in the Renewable Energy Sectors where extensive research has been going on to develop alternative biofuels, we still need the services of competent chemists to help facilitate the progress of these researches.

The qualifications required for a chemist to work in the oil and gas industry include a Master’s Degree in chemistry. They can earn an average salary of $70,195 yearly.

Geoscientists go beyond studying the physical parts of the Earth, which includes its texture and colour. Geoscientists also play the role of collecting the geochemical and geological information of the soil. With this geological information, the past, present, and future of the soil in a particular area can be studied. These studies would aid the discoveries of resources inherent in a geographical area, and help develop other sources of renewable and nonrenewable energy to serve the public. The yearly average salary of a geoscientist ranges from $85,000 – $95,000.

Petroleum engineering is one of the highest-paying jobs available in the energy sector. They solve a lot of problems regarding petroleum products, and problem solves go home with the ‘big bucks’. They are responsible for the extraction and refining of fuel oil for public consumption.

If fuel oil is not well refined, it can lead to the damage and possibly destruction of motor engines. Hence, the importance of petroleum engineers in the energy sector. They can earn as much as $137, 700 as an average yearly salary.

This group is assigned the crucial duty of operating huge power plants. They may not be the most important part of their respective Industries, yet they contribute their quota to the success of these industries. It doesn’t require a bachelor’s degree because with little or no training one can learn how to run power plant operations. Workers in this unit earn between $60,000 – $85,000 on average salary on yearly basis.

In the energy industries, before the development of an energy source, a Renewable Energy Analyst is needed to identify the viability of an energy source before time and resources are invested in developing it. Otherwise, mistakes can be made and so much time, money, manpower, and human resources will be wasted needlessly.

The average salary of a Renewable Energy Analyst ranges from $70,000 – $140,000 and could increase depending on the job and project at hand.

A whopping 100% increase is the expected job growth for wind-turbine installers. This particular job may not necessarily require a degree. However, every skilled person with a level of technical know-how and experience can learn how to install and maintain these wind turbines. They earn an average yearly salary of $54,370.