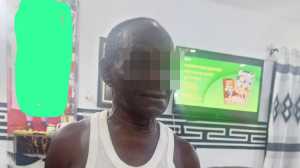 Agents from the Ogun State Police Command have detained Stephen Jack, 84, after he was charged with defiling an eight-year-old girl (name withheld).

The state’s PR representative, SP Abimbola Oyeyemi, made this known in a statement issued on Saturday in Abeokuta.

The elderly resident of Ijebu Ode’s Okun Owa neighborhood was allegedly detained as a result of a report filed to the divisional office for Obalende, claims Oyeyemi.

He asserted that when he discovered the girl, the kid’s father had told the authorities that his daughter was bleeding from her private area.

According to Oyeyemi, the little girl admitted to having sex with the suspect when her father questioned her about why she was bleeding.

Oyeyemi claimed that Murphy Salami, the DPO for the Obalende division, quickly dispatched his investigators to the location, where the “randy old man” was captured.

The old man is a well-known pedophile in the neighborhood, according to preliminary research, he claimed.

According to Oyeyemi, the victim was transported to the General Hospital Ijebu Ode to receive medical attention.

He cited Lanre Bankole, the commissioner of police, as having ordered the suspect’s transfer to state criminal investigation departments for further examination and potential prosecution.