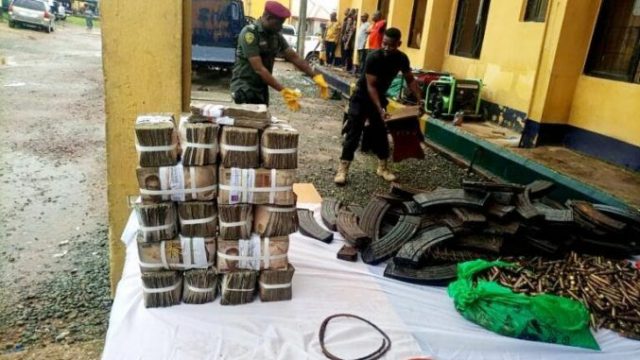 Ten members of a gang that is accused of robbing a bullion truck on July 26 and making off with over N390 million have been detained by the police in Abia State.

The accused belonged to a 14-member gang that specialized in robbing bullion vans across the nation, according to Janet Agbede, the state’s commissioner of police.

She claimed that they were detained at various times and places throughout the states of Abia, Delta, Lagos, Ondo, Rivers, and Imo.

A former member of the State Security Service is one of the suspects.

She paraded the accused before the media on Monday at the police headquarters in Umuahia and claimed that “a special intelligence, technologically-led investigation unit” was responsible for the arrest.

She said that the team was established in the wake of the July attack that took place at Ntigha Junction on the Enugu-Port Harcourt Expressway’s Isialangwa axis.

I set up a special intelligence, technologically-led investigation squad with a clear order to apprehend and seize weapons used by the lethal armed gang, according to Ms. Agbede, after thoroughly examining their method of operation.

“The squad applied speed and accuracy as they started their operations methodically.”

She said that the squad’s efforts resulted in the arrest of the offenders on various occasions and days.

According to Ms. Agbede, in their statements to the police, the suspects admitted to the crime.

According to her, the suspects admitted to robbing bullion vans in the Nigerian cities of Ajah in Lagos, Akure Road in Ondo State, Asaba, and Mbaise in Imo.

READ ALSO:  Police detain a professor who gave the order to assault a female police officer

According to the police commissioner, the suspects admitted to carrying out the Abia attack after successfully mounting a two-month monitoring operation on the bullion van.

Adesoji Adeniyi, commonly known as “Soji,” and Albert Nwachukwu, also known as “White,” were among the suspects detained in Lagos State.

Others detained in Rivers were Felix Ajalaja, Moshood Opeyemi, popularly known as “Abiola,” and Azubuike Amaefule, commonly known as “Zubby.”

The other three were detained in Imo, Ondo, and Delta, respectively: Nnamdi Nwaosu, also known as “Prophet,” Monday Samuel, popularly known as “MD,” and Matthew Christmas, also known as “Aluwa.”

Two brothers from Abia, Chikwendu and Prosper Israel, who were detained in Abia, were further suspects.

Prosper told reporters that after being fired from the State Security Service, he joined his brother in criminal activity.

The agents also seized a Mercedes Benz truck that was reportedly utilized by the gang to hide its weapons.

Out of the N390 million reportedly taken from the bullion van, they also retrieved N10.1 million from the accused.

The police commissioner stated that further investigation was being conducted to secure the capture of further gang members.

The affected bullion van, according to NAN, was transporting cash from an Aba bank to Umuahia when it collided with a robbery barricade.

READ ALSO:  Soludo claims that every gunman captured in Anambra is Igbo

The bank’s cashier was fatally shot by the robbers, according to the police, who also shot three police officers.

They also verified that one of the gang members was killed by the police following a gunfight.

Ms. Agbede has meantime made a plea to the people of Abia to keep providing the police with pertinent information so they can act proactively to combat crime.