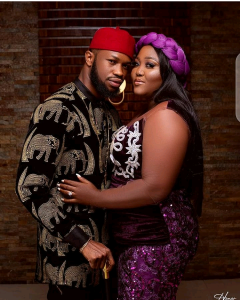 Recently, well-known actor Stan Nze made an unexpected disclosure on his union with Blessing Jessica Obasi, a coworker.

Stan Nze has revealed specifics of what transpired on the day the actor and his wife celebrated their one-year wedding anniversary.

While their supporters believed that their day was happy and worth celebrating, the couple felt the reverse.

Stan Nze acknowledged that his wife and he had fought earlier in the day and were in different moods.

The actor made this admission in an interview with TVC’s Black Table.

Stan claims that they fell out severely because they had fought and neither was prepared to make amends. Because of this, despite it being their anniversary, the two had attended church separately.

He appeared dissatisfied in the footage that went viral, Stan Nze observed. He found it impossible to be miserable while appearing to be cheerful.

His wife explained away his foul attitude as being emotional, and he felt bad knowing he couldn’t disclose what was really going on.

Stan remarked: “You know you dey vex, I dey vex, I no gree today. The times me and my wife have had like some fallout.

We didn’t talk as we headed to church on the day of our anniversary. When we arrived to church, it seemed that a group of supporters had gathered outside with money cakes and food trays.

I was the one who announced my tardiness and lack of mood. I couldn’t pretend to be happy after she posted the video, so I wasn’t.

Though we weren’t conversing, my wife claimed that I was upset.